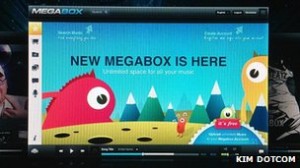 Megaupload owner Kim Dotcom has announced his plans to launch a new website, despite still being under arrest.

The 38-year-old tweeted an image of Megabox, a site he said would allow recording artists to sell music directly to fans.

It is not clear when the new website will be launched.

Mr Dotcom was arrested in January in New Zealand because, alleged the FBI, his site was being used for piracy.

Speaking about his new site, Mr Dotcom tweeted: “The major record labels thought Megabox is dead. Artists rejoice. It is coming and it will unchain you.”

In an interview with bit torrent news site TorrentFreak.com last year, Mr Dotcom said the service would allow artists to keep 90% of earnings from their music.

Following his arrest, Mr Dotcom’s assets were frozen and he has been placed under house arrest at his New Zealand mansion.

Prominent internet rights group the Electronic Frontiers Foundation (EFF) is taking the FBI to court over its handling of users’ files, with a hearing set for 29 June.

It argues that users of the site have a right to access their files which were seized in raids prior to the arrest of Mr Dotcom and several of his team.

“We’ve asked the court to implement a procedure for all consumers, not just our client, to recover their data,” the EFF told technology news site Ars Technica.

Among Mr Dotcom’s tweets is a picture of himself with Steve Wozniak.

Mr Dotcom told TorrentFreak that the Apple co-founder was “totally supportive” of the efforts of the EFF.

The trial of Megaupload founder Kim Dotcom and the site’s management team is due to start on 6 August.

This entry was posted in Digital Rights. Bookmark the permalink.